Takemata Hirotsuna bold general in command of Uesugi Kenshin’s vanguard during the fourth battle of Kawanakajima.

The heavy cavalry base for the IMPETUS wargame reproduces the general flanked by the samurai of his reigning hatamoto.
An ashigaru on foot follows them carrying the general’s personal banner.

The miniatures used are by Perry Miniatures.
The miniature of the general is made by modifying the pose of a perry piece and modifying the helmet (kabuto) using putty to reconstruct the tiger skin and pieces of the warlord miniatures for decoration (maedate). 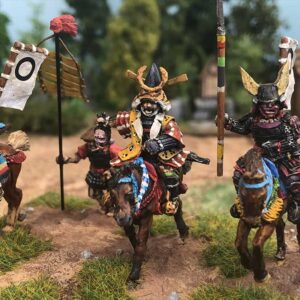 Samurai on horseback have been modified from basic pieces by replacing weapons and modifying kabuto with maedate.
The general’s personal banner (umajiurushi) with its “roller shutter” shape was reconstructed using sheet metal and metal wire.

Check out other miniatures from the Kawanakajima project